skip to main | skip to sidebar

You know what? I've been doing this since 2005, and I think it's about time to shoot it in the head and put it out of its misery. (Or send it out to pasture, if you prefer.)

Thanks for reading my friends. Bon chance.
Posted by Annie at 6:43 pm

Not down with the kids

Marking the SATS writing tests, some of the little boys have choosen to write about football in their short writing task. I've now come across several references about having to 'skill up' other people. Excuse my footballing ignorance, but what does this mean? Is it a technical term?

One of my favourites in my group, answering the question 'Why do you like this game?' has written in regard to football 'Because I was born'. Bless his heart. I think he means, if you are alive at all, you must love it.

BTW, for anyone who remotely gave a shit about the Asians in Football, seems there is some activism out there. Phew. (Also there's apparently a footballer of Bangladeshi descent who plays for Fulham. I intend to stalk him.)
Posted by Annie at 7:39 am 9 comments:

Clearly, I am having a midlife crisis. Rather than getting involved with inappropriate men (bad) or getting a red Ferrari (can't drive anyway) I thought I'd get a tattoo on my next birthday. In the past I've gone along for moral support with no less than 5 friends, always thinking secretly "Hahaha! You'll never get me under the needle!" as they groaned their way through it. 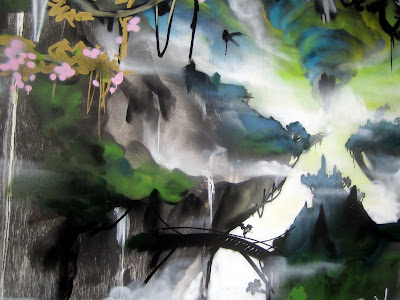 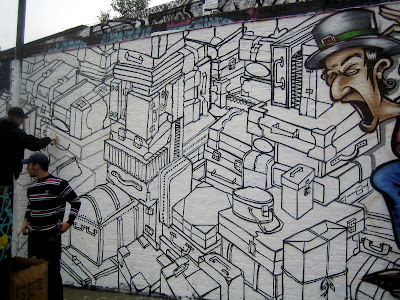 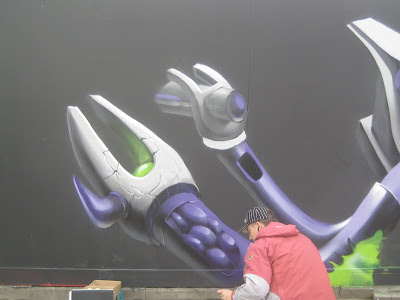 Last weekend was the world-wide Meeting of Styles, the London one was in Bacon Street, off Brick Lane. Most of it is not really my cup of tea, but it was amazing to watch all these artists out in force with their spraycans, and you have to marvel at their skill. I wish I could take the kids to see it, but clearly SATS SATS SATS and TESTS TESTS TESTS are more important than seeing live street art from artists all over the world in their local area...

Check out some more on Flickr.
Posted by Annie at 6:34 am 6 comments:

Right, I cannot put it off any longer. The agent's coming around tomorrow and I must do some hoovering. I think I last hoovered in November. I think the carpet might be cream. As Quentin Crisp said about housework, after the first 6 years the dust doesn't get any worse. (The great thing about living alone is that you can be a total lazy slut and no one can nag you about it.) It's also a good excuse not to crack on with the reports. 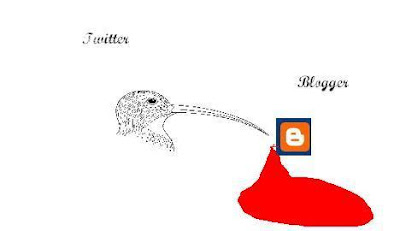 There, that surprised you, didn't it? She's all about the clothes and the shoes, you thought.

Why are there no Asian footballers?

I asked K, our PE co-ordinator, who is brilliant and gets the little inner-city kids fencing and learning judo and cricket and rugby (famous rugby player visited us, the male and female teachers were goggling in awe for widely different reasons) and competing in stuff all over East London, in the face of extreme parental indifference to any sport or exercise. Thank god for him.

He was talking about one of our kids with natural talent, who pretty much was a one man team in a game against another school with players in the West Ham junior club... Why don't our kids play for the junior clubs, I ask? How do scouts spot them? They don't come to the schools to talent spot, he said, they will go to tournaments... but this kid is pretty much too old now, they start between 6 and 9 and he's past it at 11. And the parents don't know or don't care about the junior clubs.

I'm spitting feathers. 'So the clubs don't go out there... and the parents aren't interested... And all these kids' talents and skills are going to waste... Why doesn't the FA do something about it? Some positive discrimination?'

'It's a cultural thing' chips in someone. They don't want them to be footballers. They're not interested... in the 70s all the black kids wanted to be footballers, because they saw the few black players out there and said 'I'm going to be like him...' They don't think they can do it, because they don't see it. If the parents could see someone succeeding, it might make them consider it for their children.

It's a vicious circle isn't it? K said things were getting better. But think of this... they've been in the UK since the 70s. That's 40 odd years of wasted talent. It's a tragedy.
Posted by Annie at 10:08 am 13 comments:

Annie
My haphazard, erratically updated blog about printmaking. Recent posts are for the Critical Debates module on MA Printmaking at Middlesex University